The opposing forces of what I’m calling civil disobedience and willful blindness underlie the dilemma of the gig mindset inside the organization. They are the fundamental forces that will make or break the gig-mindset way of working and are the subject of an early chapter in my upcoming book.

A senior test engineer in a global industrial company based in Europe shared how he and colleagues worked to bring visibility to new ways of working, or what I call the gig mindset:

“Some more radical things were coming from the idea that, if we are going to change a company as large as ours, it’s not any different to change in society, so why don’t we do things like civil disobedience. The idea was actually protesting, peacefully in an open area where senior managers would see us. We wanted to demonstrate what we are already doing, and make it inclusive, so others can see and join us.”

The initiative worked well because several top leaders were asking why HR was not involved. The answer was they had not seen any reason to involve HR. It was a people-led movement. He explained:

“What’s happening is not based on a method or a model. In fact, people all around the organization are experimenting with different ways of working. Our goal is to help them share what they are doing.”

This is very much the gig-mindset approach inside the workplace. We will first look at five attributes that gig-mindsetters bring to organizations. The impacts are sometimes visible, sometimes hidden. They tend to make management uncomfortable because they go against traditional behaviors and ways of working. The new behaviors are considered to be deviant ways of working. Most senior managers are blind to the positive side of the deviance and do not understand the value of what the gig mindset brings.

The table below shows how behaviors can be perceived as a deviance or a positive deviance. A positive deviance is a behavior that is uncommon, deviates from “normal”, but brings value. Of course, this is not a black-and-white situation. There are other factors involved when it comes to how the behaviors happen. 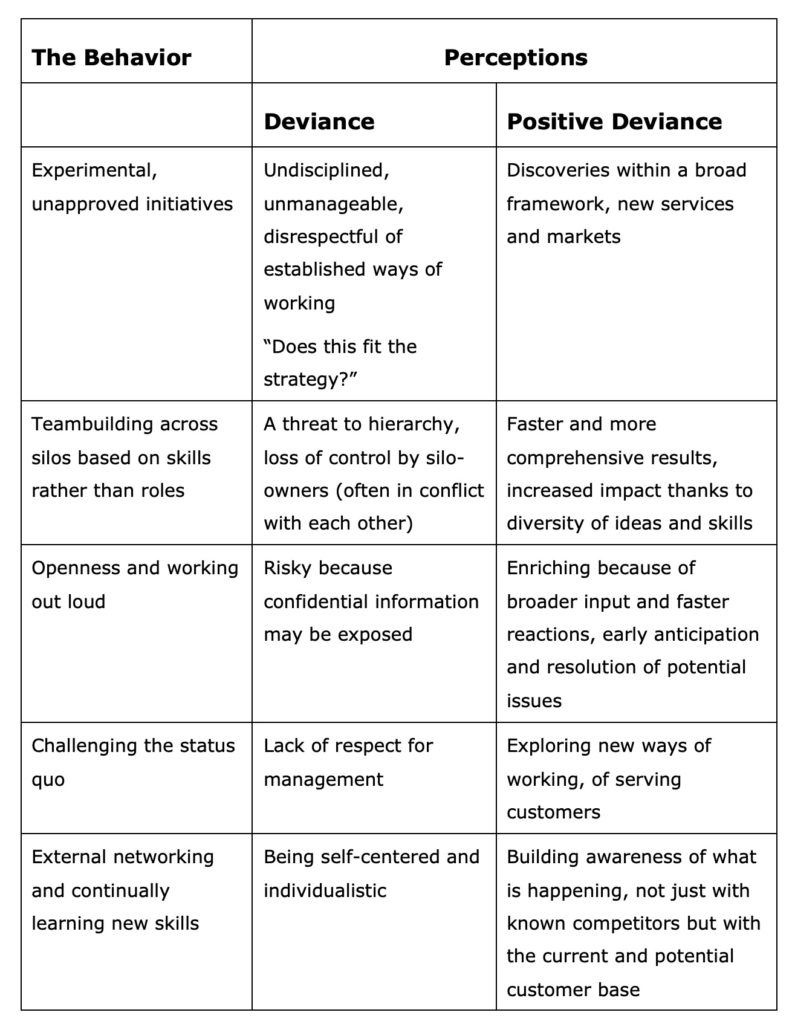 When something seemingly positive is resisted, it is important to understand the thinking–reasoned or emotional, that underlies the opposition, in order to better overcome it.

Indrajit Gupta, analyst, editor and business journalist, based in India and co-founder and director at Founding Fuel explains how he sees the resistance to the gig mindset by many senior managers today:

“I think it’s a form of blindness, a case of willful blindness. Some senior people are unable to step back and see why they’re losing relevance, especially if they’ve been successful in the past. But if you get caught up in operations and if you think that you can shut out the world and keep doing what you’re doing forever and ever, and follow the processes that you’ve done all your life and that you’ll continue to remain relevant, it’s a fallacy. If you look at any industry, in India or in the US, the mortality of companies is frightening. But why don’t more people get it then? That’s the key question.

Some top-level managers get it. A CEO of a company specialized in workplace design for education, healthcare and retail industries, explained why gig mindsetters represent a threat to most organizations and leaders:

“We are seeing roles and processes being converted into skills required for performance. When you eliminate roles, you start to fracture hierarchy. The culture, the technology, communication, employee performance reviews, and nearly every other aspect of traditional business structure is stressed.”

Let’s look at them briefly, one by one.

Pride in past success–blinders in a fast-changing world

People who have worked for 10 or more years to reach where they are in the hierarchy, are not at ease with someone who challenges the status quo and questions how the system works. The traditional mindset believes there is no reason to interfere with something that has worked well and continues to do so.

Faith in best practices and benchmarking–leaning on the past, not leaning to the future

You can avoid a slow march to irrelevance by focusing on the future rather than on traditional benchmarking and best practices. This does not mean forgetting the past. It does not mean ignoring what other in your field are doing. It does mean looking forward and not using the past as your guide to the future. And not assuming your traditional competitors are the most relevant organizations to watch today. As corporate strategy specialist C.K. Prahalad states in a Harvard Business Review column, “During a corporate transformation, the forgetting curve is sometimes more important than the learning curve.” He observes in another piece that “Companies become winners by spotting big opportunities and inventing next practices.” (see notes below)

Fear of losing power–weakening of the hierarchical crutch

People fear losing what they have. For senior leaders, the premise of the gig mindset disrupts long held views about themselves and how they work. They are being challenged, indirectly, by people throughout their organization who are beginning to act independently of hierarchies and taking initiatives that are not pre-approved. When recruiting and making hiring decisions, decision-makers who value power based on hierarchy are likely to hire new people who show respect for the status quo. They are unlikely to threaten the “way things are done here” with new ideas, new ways of working.

Fear of speed–slow and cautious, step by slow step

People with a high gig mindset perceive change happening much faster externally than internally. They tend to be impatient with slow, methodical approaches because, with their extensive networking and awareness of the speed of change in the external world, they are motivated to move fast themselves.  Data from my gig mindset survey of 300 people worldwide show that people with a high gig-mindset score are 25 percentage-points higher in perceiving external change to be faster than internal change. People with a lower gig-mindset score see relatively little difference between internal and external.

I always remind my clients of this phrase from a conversation I had years ago with an digital strategy manager in a global industrial company: “My silo is my neighborhood. But my neighborhood is part of a city”. This was the way he made people in his company stop and think about the difference between closed silos and open silos. It’s the city part most people forget. It also makes sense to go beyond that, as the city is part of a country, which is part of the world.

Living in filter bubbles–isolated in the center, disconnected from the edges of the organization

The people on the edges of organizations, especially those who are customer-facing, see more of the external world than do the people inside the corporation. Unfortunately, these people are often forgotten or left to the last to be interviewed when initiatives and strategies are being defined. Too many well-intentioned management initiatives end up serving no purpose. For example, an off-site gathering of senior management is not the best way to go about breaking through the filter bubble. Walking around the factory floor or the front lines of customer service brings more insight. Too bad most managers, especially at high levels, prefer to stay in their bubble.

The more organizations try to maintain systems and work methods from the past, the more vulnerable they become. They will be unprepared for future disturbances and will not be in control when the unexpected happens. The behaviors they have suppressed or weakened, such as the those in the table above, leaves them in a weak position when there are sudden changes.

Civil disobedience and willful blindness underlie the dilemma of the gig mindset inside the organization. How you handle them will make or break the gig-mindset way of working in your organization.

Willful blindness is a concept developed by Margaret Heffernan in her best-selling book Willful Blindness. Why We Ignore the Obvious at Our Peril published in 2011 by Bloomsbury, USA. The concept originated in the field of law and refers to situations where people are responsible for things they should have or could have known, but instead claimed they did not. Heffernan’s book illustrates examples from many domains. In my book I am using the term to describe the attitude of many senior managers who are unconsciously or deliberately unaware of change internally and externally, and how this results in negative reactions to the gig mindset.