My research has identified 8 behaviors that characterize traditional and gig mindsets.   If you scan the list of traditional behaviors, the left column on the chart, you’ll see that most organizations strongly enforce this way of doing things. Processes, roles and management practices are aligned to the traditional way of working. Gig mindset behaviors, the right column, are rarely encouraged, and sometimes even sanctioned. The challenge we are facing is that organizations need both mindsets. They appear to be opposites, but they are actually interdependent and complement each other. They are polarities. It is not a question of “either or”, but rather a question of “both, when”. How to know which is better when?

Navigating a Polarity with a Moving Target

How gig should your organization be? When and why? How traditional? Where and how? People find themselves struggling between these two approaches when decisions need to be made, strategies defined, initiatives launched. Discussions turn around questions of the “right” way to reach the goal or solve the problem. Opinions collide and conflict builds.

Very often, people believe they have a problem to be solved. In reality, they are facing a polarity to be managed. The trick is to get the right balance at the right time.

I am adapting Barry Johnson’s polarity management model to help us understand how to determine firstly what actions to carry out to reach a goal, and secondly how to recognize early warning signs indicating that you need to adjust your strategy and actions. I recommend using this model in workshop mode with people involved in decision-making around an issue because it helps take emotion and conflict off the table. It leads people to a greater ability to define actions that work towards their goals, given the starting point, the goal and circumstances.

More importantly, it opens minds to how a change in actions and strategy is not a question of right and wrong. It is simply navigating with flexibility in the direction you want to go.

What follows is a series of steps to go through as a group. You can do them in any order, and will certainly find yourselves working back and forth from point to point as you advance. 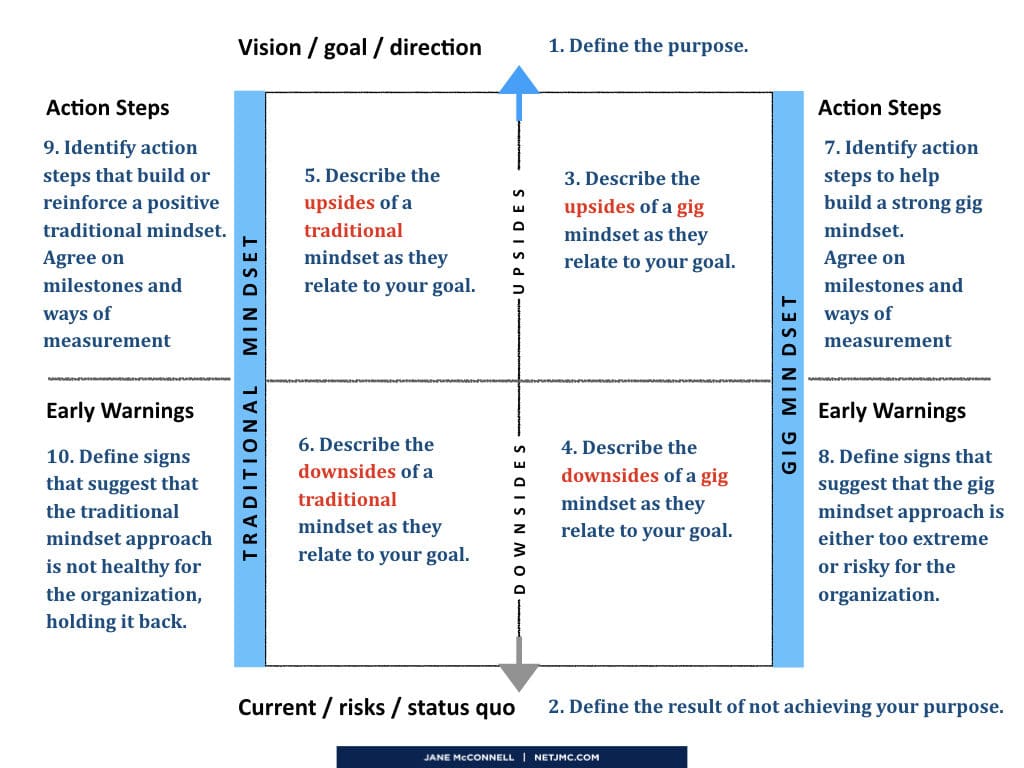 Start with the big picture.

1. Define the purpose, the vision, the overall goal or direction.

2. Define the results, risks or impact of NOT achieving your purpose.

Look at each mindset outcomes in detail.

3. Describe the upsides, positive observable outcomes of a gig mindset way of working

4. Describe the downsides, negative observable outcomes of a gig mindset way of working

5. Describe the upsides, positive observable outcomes of a traditional mindset way of working

6. Describe the downsides, negative observable outcomes of a traditional mindset way of working

Find action steps to achieve the upside benefits and early warnings you may have gone too far.

8. Think about early warning signs that suggest you may have gone too far.

10. Identify early warning signs you may be going too far in that direction.

Adjust based on early warnings.

When early warning signs occur, on one side or the other, you need to reinforce the actions you have identified for the benefits of the opposite side. In the example below, an early warning sign for the gig mindset is that clients are asking for more and more new features as the project is on-going, making the projet undeliverable. One way to approach this is to look at the action steps for the traditional mindset, such as using project managers with more experience in managing client expectations, or defining deliverables or an agreed scope statement from the beginning.

The examples on the chart below are intended to give a sense of how you can navigate the polarity of the gig mindset versus the traditional mindset flexibly, without falling into extreme disagreements, or worse still, meaningless consensus.

This method frees people to disagree in a tangible, reasoned way, and to envisage alternative actions from the beginning. 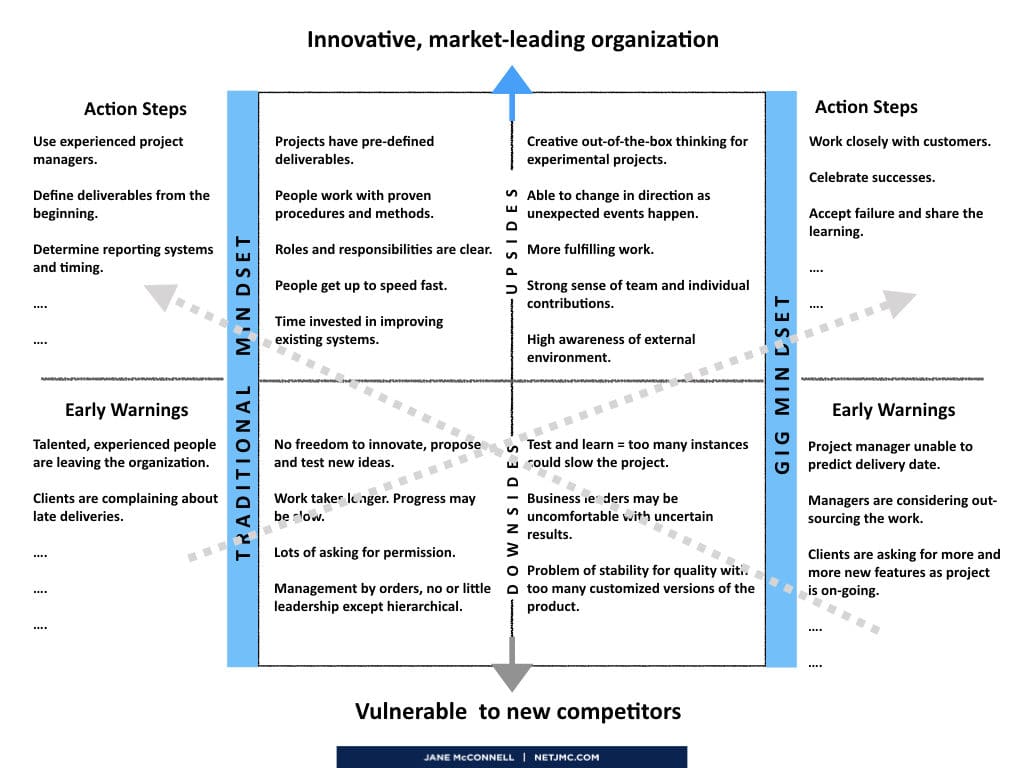 Get in touch if you decide to experiment with this method. I’d be pleased to talk through your case, and am interested in comparing how it works in different contexts. 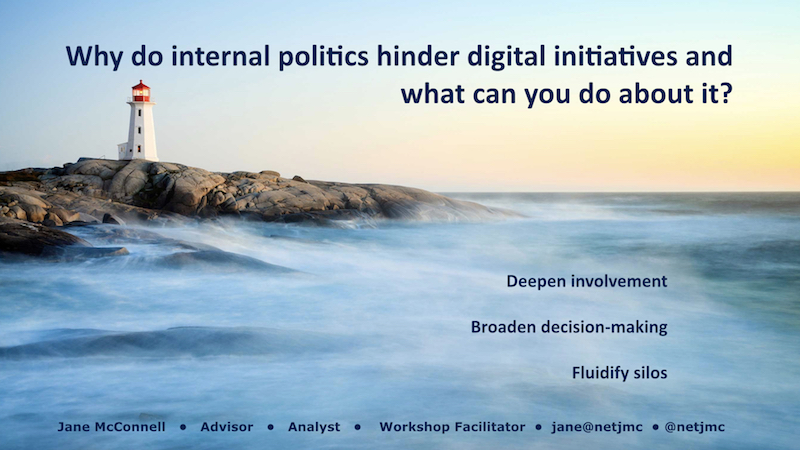 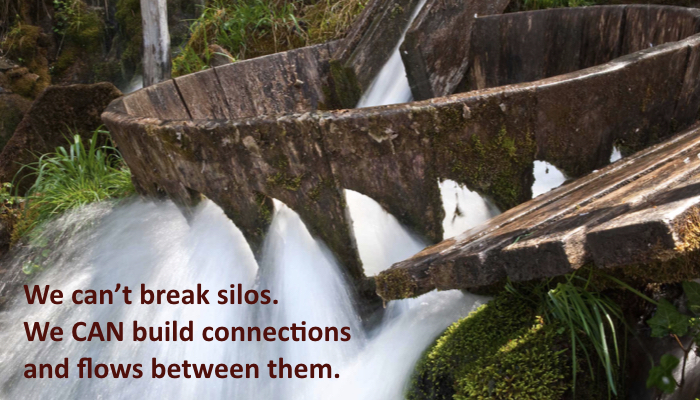 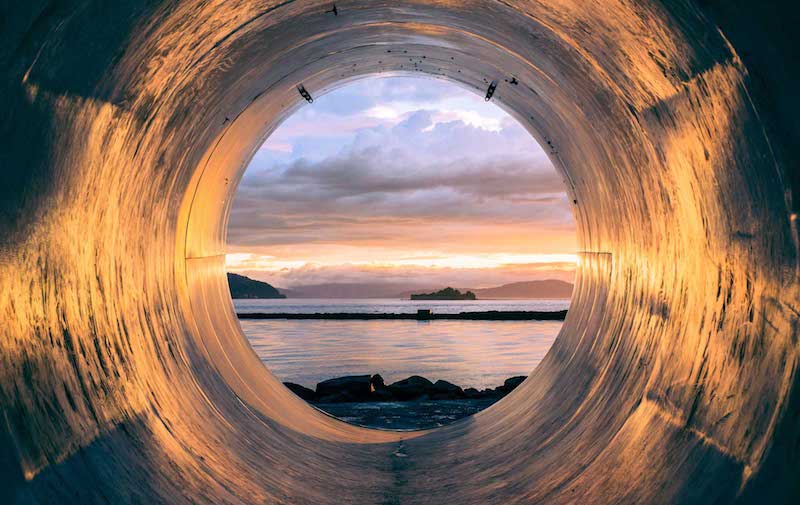