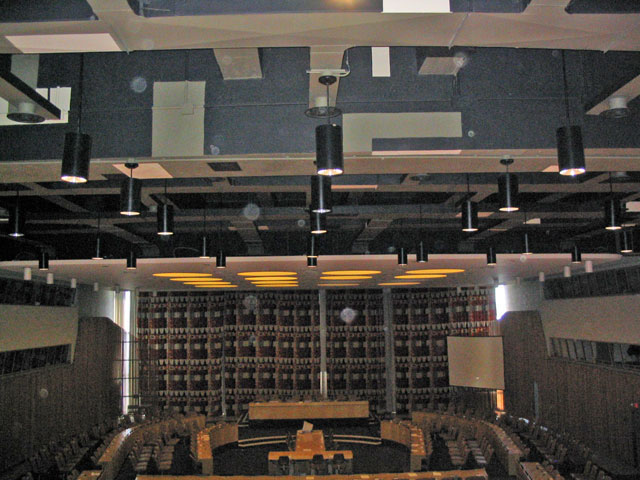 Intranets and digital initiatives are never finished. They are part of continual change in the workplace.

Observation in 2017: This famous unfinished ceiling at the United Nations is a timeless reminder for me of how some movements and initiatives will never end. When I took this photo in 2005, I was working with the Secretariat in New York on their intranet. The post below was written at that time.

The reality I know today is that many organizations find it hard to keep up momentum and energy on initiatives like intranets and digital work environments that never end. There is always another step to take. How to keep leadership attention? How to maintain and increase involvement throughout the organization? The answers vary, from organization to organization. There’s no magic potion!

The original post in 2005: I worked on an intranet project with the Secretariat of the United Nations at their headquarters in NY, and was struck by the unfinished ceiling in the room where the Economic and Social Council meetings take place. The Swedish designers decided to finish only part of the ceiling, and to leave a large part uncovered. This lets people in the room see the structural pieces that are not covered by the attractive ceiling finishing materials.

The Swedish designers wanted to make the statement that the work of the Economic and Social Council would never be finished. Their work concerns sustainable development, respect for human rights, eradication of poverty and education issues.

I took a photo of the ceiling because it reminded me of intranets, which are not projects but rather processes. They are part of ongoing change management and evolution to new ways of working. In this sense, they will never be finished.