I have worked with many organizations with very different cultures, as well as different ideas about what culture actually means.

Does your organization have a gig-mindset cultural fit?

The word culture means everything and nothing. Is it a buzz word, a red flag, a motivator or a blindfold?

Culture is used by senior management to inspire people. HR specialists use the concept to help guide hiring decisions. Advisors and consultants say they can help you shape your culture.  (They can’t, by the way.)

It all comes down to defining what we mean by cultural fit. Some believe a common, shared culture kills diversity. That it discourages free-thinkers, that it makes it risky to go against the status quo. These are  misconceptions. It all depends on what the culture is!

The gig mindset is a work culture. One that values independent thinking, autonomy, risk-taking and reverse leadership.  The gig mindset culture is essential today for building resilience and surviving – for individuals and for organizations.

From the introduction of my book The Gig Mindset Advantage:

If management is not aware of the benefits of having a work culture oriented toward the gig mindset, the organization runs a risk of disappearing or diminishing its place in the world.

Today, the gig mindset is a bottom-up and individually driven move- ment. Tomorrow it will become the accepted and encouraged way of working, where leaders will be proud to say they have a gig-mindset work culture.

Culture emerges from actions and interactions

It may be defined in value statements but the reality is that it means why and how people work.

Unfortunately, many people think hiring for cultural fit means “similar to me”. But Joeri Hofmans and Timothy A. Judge  make the case  for  culture meaning “similar values to me” in  Hiring for Culture Fit Doesn’t Have to Undermine Diversity: (HBR). They discuss misconceptions…

They talk about how to hire for cultural fit and how it is a necessity, does not hurt diversity nor innovation.

In one of the case studies in my book, a senior director explains how they evaluate cultural fit through behavior simulations. The short description of Behaviors that Transform along with the other Stories from the Future will – I hope – tempt you to buy my book when it’s available in May 2021!

As always, I  look forward to your comments and feedback. Be sure to get in touch if there are topics you’d like me to include in future Briefing Notes.

I’m now researching how governments, capitalism and variations of democracy have interdependent relations with large companies and organizations. (More below on what I’m reading.) If that topic interests you, let’s connect and share our thoughts.

What I’ve been doing and reading

What kind of networking do people do across organizations?

I wrote a short post on LinkedIn asking if people on LinkedIn interact and network. It’s easy to network internally, harder across different organizations. I was disappointed with a poll I ran on Twitter a few days earlier about 4 traits of behavior (including networking) from my 2018 gig mindset research. Only 4 people responded. 🙁
BUT, one result was identical to my earlier research survey of 300 people: The lowest of the 4 behaviors I surveyed on Twitter was networking. When 4 people mirror 300 people, there must be some truth to it!
So, I asked if LinkedIn is just a place where people promote themselves without interacting and engaging in real conversation?

To my surprise the post has been seen by over 2300 people and has 54 comments – including some back and forth conversations. Take a look at it, and jump in! 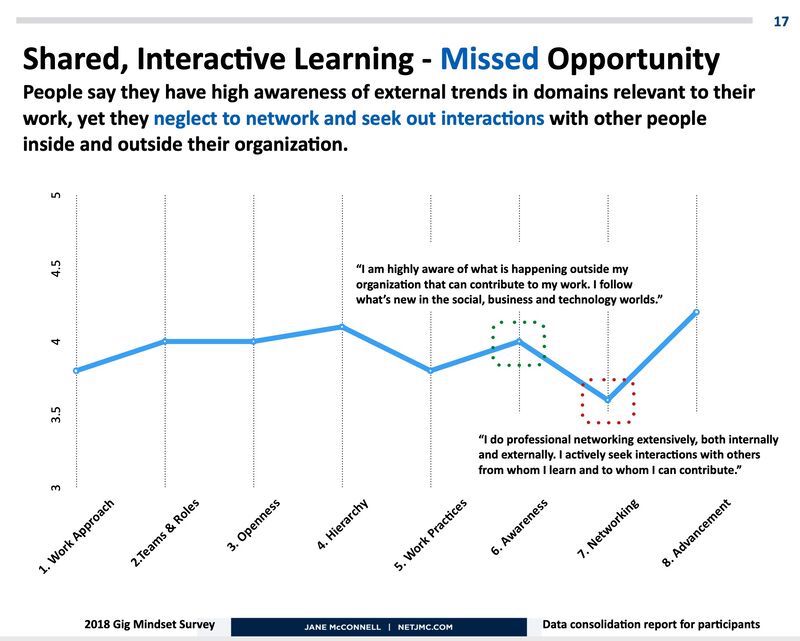 Speaking of networking, my Paris-based workgroup (previously IntraNetwork) is now going global.  With all our sessions taking place online, we are hoping people will join us from other European countries, Russia, India and parts of North and South American–within reachable time zones.

You can read more about our group here and see why and how to join us.

What I’m reading these days

As I mentioned earlier, I’m researching how governments, capitalism and variations of democracy have interdependent relations with large companies and organizations.

2 quotes to make you think:

Positive thinking may be a quintessentially American activity, associated in our minds with both individual and national success, but it is driven by a terrible insecurity.

We have lost so much of our edge in science and technology that American companies have even begun to outsource their research and development efforts.

The veneer of power appears untouched before a revolution, but the internal rot, unseen by the outside world, steadily hollows out the edifice state. And when dying regimes collapse, they do so with dizzying speed.

As we descend into a world where we can depend less and less on those who hold power, movements like Occupy will become vital. These movements might not be called Occupy, and they might not look like Occupy. But whatever the names and forms of the self-help we create, we will have to find ways to fend for ourselves. And we will fend for ourselves only by building communitarian organizations.

Why new? Why bold?