Discover what is relevant for you.

I’ve published over 300 articles since 2006 on topics around the digital work environment in organizations and am working on getting them all tagged.

I’m looking at how talent is found and brought into organizations. The chart shows that #gigmindsetter skills are not yet at the top of the list, especially the ability to challenge status quo.

Working out loud is natural for gig mindsetters

This is an extract from an article I wrote in 2017 about the Marshall Space Flight Center, (part of NASA): Working out loud from the top – half a century ago. I’m working on a chapter in my book about the gig mindset inside organizations, and it led me to reflect on working out loud.

Historical perspective on the gig mindset

Data from 12 years of global surveys brings me new insights on a lot of topics! For example here: The Emergence of the Gig Mindset. It’s crystal clear why it is happening!

People Movements Bring Change. The Gig Mindset Is No Exception. First, people brought social to the workplace This happened with social networks, which entered organizations timidly over a decade ago, were upsetting to many senior managers, but have now become widespread: approximately 60% of organizations have a single network worldwide, and another 25% have multiple networks. Then people led and won the BYOD debate. BYOD is another example. Bring Your Own Device was frowned on, even forbidden, in most companies. People did it anyway. Why? Because they had no choice. They needed mobile to do their jobs. Today well over half of organizations officially allow it for work purposes. And most of the others accept it. Companies with the most successful customer-facing workforce also have the highest rate of BYOD. I wrote about this in 2016: Tracking the Trends in Bringing Our Own Devices to Work in the Harvard Business Review. Exceptions occur of course in highly regulated industries or on sites with highly classified data. Now the gig mindset is the new battle ground.

I just finished my 3rd Briefing Note of 2019 which I entitled: The lost art of reading, the lost art of writing. Pessimistic? Yes, but that’s the reality I see around. I included notes about Alan Rusbridger’s new book: Breaking News. The Remaking of Journalism and Why It Matters Now. I’ve been a fan of Rusbridger ever since I read Play It Again. An Amateur Against the Impossible. I wrote about it in 2014: What we can learn from a newspaper (and it’s not the news) I’m running late on my Briefing Notes, and I”ll just blame my book project for that, but it’s no excuse! 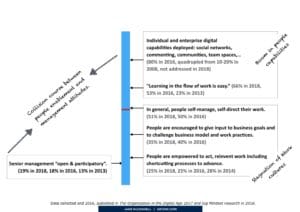 People, work cultures and leadership are out of synch

The point of this short article is to show data over past years that provide a context for understanding the emergence of the gig mindset: High people capabilities in stifling work cultures  with rigid management practices have led to new behaviors for people who are self-motivated to make a difference in their organization.

My research has identified 8 behaviors that characterize traditional and gig mindsets.   If you scan the list of traditional behaviors, the left column on the chart, you’ll see that most organizations strongly enforce this way of doing things. Processes, roles and management practices are aligned to the traditional way of working. Gig mindset behaviors, the right column, are rarely encouraged, and sometimes even sanctioned. The paradox we are facing is that organizations need both mindsets.

Figure 4 for “How a Gig Mindset Inside Organizations Will Shape Our Future”, published on LinkedIn and as part of a series of posts for the 10th Global Peter Drucker Forum blog. The survey data show that older workers are more likely to have a gig mindset approach to work whereas the younger age groups self-assessed at the lowest level in the survey population. Unsurprisingly, the younger workers rate themselves significantly lower on behavior 4: assuming responsibility outside of hierarchical systems. 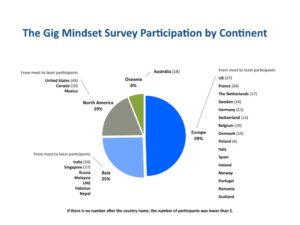 Figure 3 for “How a Gig Mindset Inside Organizations Will Shape Our Future”, published on LinkedIn and as part of a series of posts for the 10th Global Peter Drucker Forum blog. The first phase of the research was a short online survey involving 297 people around the world who feel an affinity to the gig mindset as we defined it. 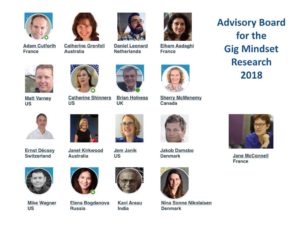 The Advisory Board brought extensive experience from different industries and countries on the gig mindset inside organizations. Here’s a link to the pdf file where you can see the members LinkedIn profiles.

First Thoughts on the Gig Mindset Inside Organizations

These are the slides I used for my keynote at the Enterprise Digital Summit in London in June of this year. I have updated the behaviors table to correspond with the final version developed with the help of my Gig Mindset Advisory Board just before we launched the survey.

Does your role have a gig-mindset orientation?

Preliminary observations that will be developed in more detail in the final consolidated data report from the on-going Gig Mindset survey: 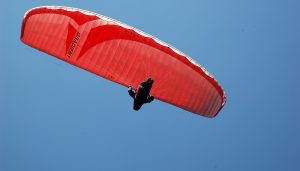 What is the goal of the gig mindset research? For the last few years I have seen many people, salaried, INSIDE organizations, showing signs of attitudes and behavior similar to external freelancers. I use the term “gig mindset” to describe this phenomenon and decided to explore it further. 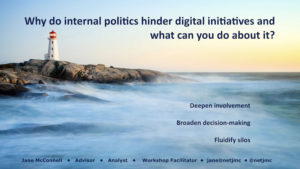 My webinar “Don’t Let politics Block Your Digital Initiatives” triggered high interest and lots of questions. I’m writing a series of posts in response to the questions I did not have the time to answer during the event: “So many questions, so little time!” 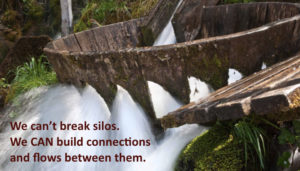 Q: How would you know that politics are being managed well enough not to impact the success of the program, apart from just measuring the digital transformation KPI’s? J: Stories beat numbers. 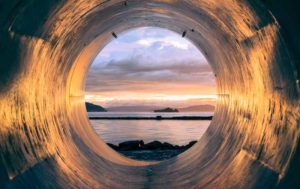 Q: What is the difference between normal change management and digital initiatives? J: Digital changes your vision of the world. 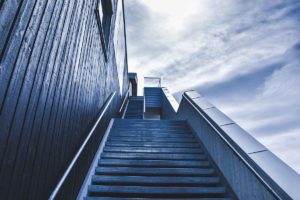 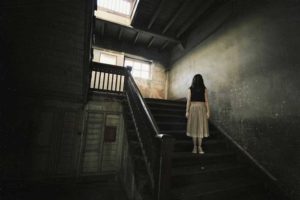 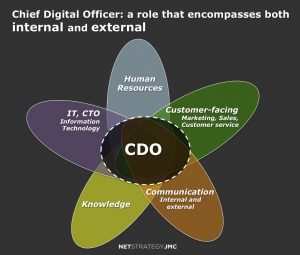 Territorial Challenges At The Top

Q: On what level of the organization do you see most of the internal politics happen? J: At the top and near the top. 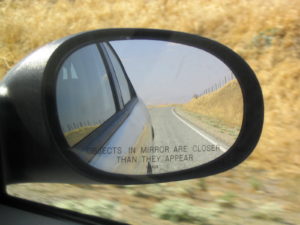 Bring the Outside In

Q: What are your views on dealing with senior executives who downplay digital? How can you create a change that goes in the right direction? J: Bring the outside in. Show what’s going on in the world. 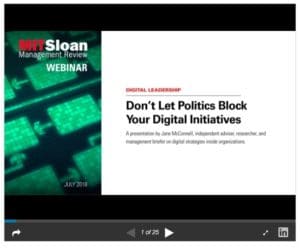 Here are the slides used during the webinar I did with MITSloan in July 2018. The attendees had lots of good questions and I’m writing up the ones there was no time to answer. Stay tuned!

Figure 1 for “How a Gig Mindset Inside Organizations Will Shape Our Future“, published on LinkedIn and as part of a series of posts for the 10th Global Peter Drucker Forum blog. The framework for the gig mindset research started with a description of 8 contrasting behaviors. The version you see above is the current result after many hours of conversation and refinements with the Gig Mindset Advisory Board.

I’ve started a series of briefing notes about the organization in the digital age. They cover different facets of digital transformation: leadership, change, enterprise entrepreneurship, individual development, along with other topics and challenges. 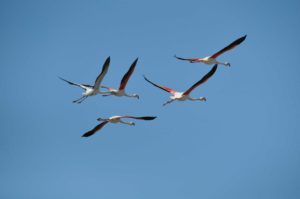 The gig mindset brings a sense of freedom, openness, engagement and accountability, inside and outside organizations. The gig mindset in the workplace should be embraced, not resisted. 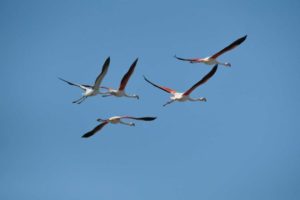 Do you have a gig mindset?

I’m researching the gig mindset. I do NOT mean external gig workers or freelancers or members of what is commonly called the gig economy. I mean people who work inside organizations, have managers and salaries, but behave in similar ways to external freelancers.

These are the slides I used for the opening keynote presentation at IntranetReloaded in Berlin in April. There was a lot of interest in the ideas of the gig mentality inside organizations. A number of people talked to me over the 2 days telling me their gig stories. “What if we saw vision not as a determined end state we need to achieve, but as a  co-created, evolving pattern we are living in that informs every decision and interaction in the now.” 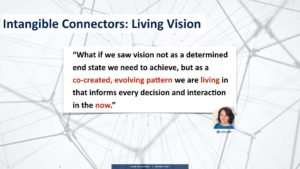 The living vision means our vision is how we are living today, how we work and interact with people around us. I was inspired by Sonja Blignaut who recently wrote: “What if we saw vision not as a determined end state we need to achieve, but as a co-created, evolving pattern we are living in that informs every decision and interaction in the now.”

Digital Transformation is Getting Real 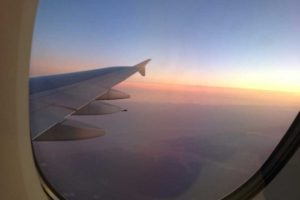 The Inclusive Organization and the Reachability Factor

How can you build the right balance between global and local needs, desk-less and desk workers, and the center and the edges? If you can get it right,  it will change the DNA of your organization to one of genuine inclusiveness. You will fortify the sense of common purpose and belonging. Originally published on the Global Peter Drucker Forum Blog.