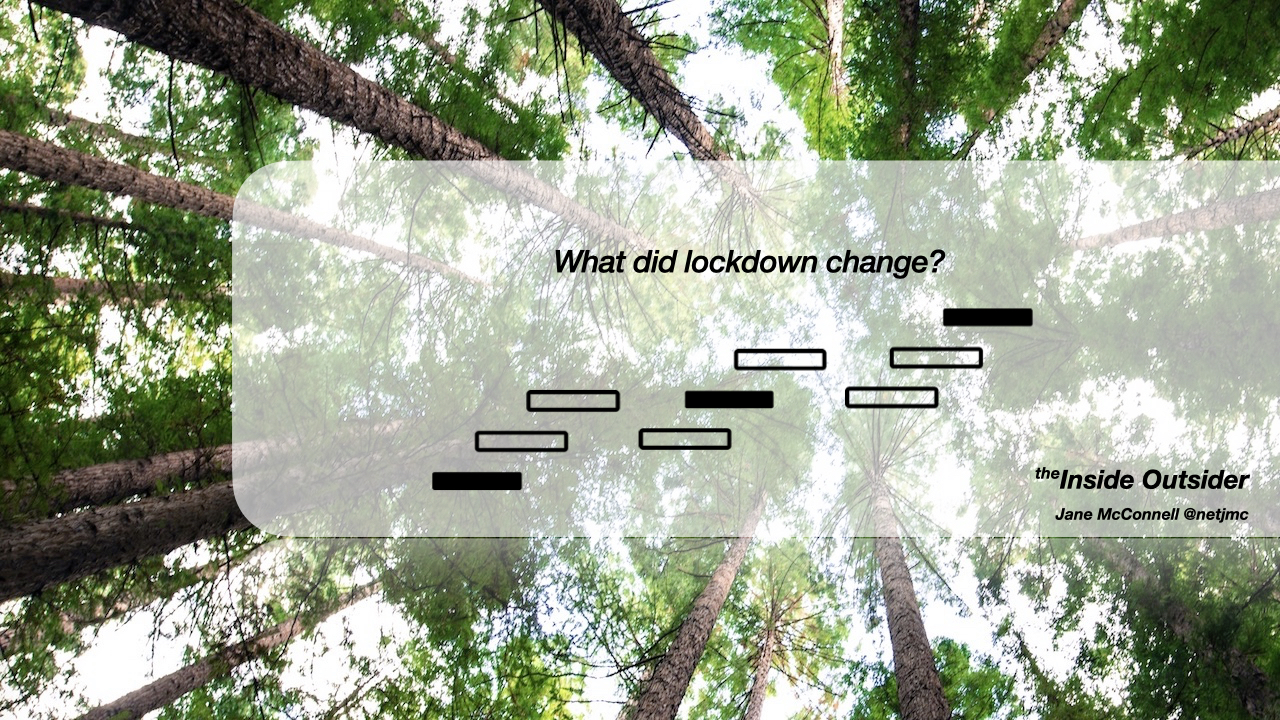 This article is a short take based on input from my 2021 gig mindset survey. I conducted two surveys, one in 2018 and the second in 2021, the second deliberately looking to see how the workplace had changed during these critical years.

Qualifier: The question of what changed in lockdown is deeper and broader than the points below. In addition, we know that the pandemic is still devastating parts of the world and will very likely continue in new waves over the near future.

I will share more input in future articles, but in the meantime, let’s start here with people’s answers to a basic question. Responses ranked from highest to lowest.

The chart shows the top 25% in orange (highest scoring in self-assessed gig mindset behaviors) versus the bottom 25% in yellow. The survey average is in blue.

There were more comments at the positive end than the negative one. Even though this is qualitative evidence, not hard quantitative, it is a sign as to how people are thinking and feeling.

Borders breaking down, inside and outside

“Before the pandemic, 99% of people were located in one of several local offices and teams were largely built by people within the same office. With everyone remote, cross-office teams are forming more frequently.”

“I do not see us going back to the old ways of working. Geographic boundaries are becoming less important. Work schedules are being more flexible. People are adapting to the use of technology to increase collaboration. When the general restrictions created by the pandemic are gone, but the flexibility remains, it seems like there will be an increased ability to shape work and personal life to better match individual needs.”

“Personally I am optimistic in that the pandemic will have accelerated a future that was anyway to happen and answered questions that otherwise would have taken a long time. The open question is what the new equilibrium will look like. And how much this collective ‘near death’ experience will have on employees’ mindset, love for work and love for personal life.”

“It most likely accelerated the need to adopt a gig mindset. A culture change is on its way to open up to our ecosystem, including coopetition. Employees are now challenged on developing a ‘growth mindset’.”

“It really jump-started cross-company collaboration programs that we had already started in 2019/2020.”

“Some senior leaders got closer to their teams but still use the command and control approach.”

“I cannot say that I’ve noticed a huge change. There has been a shift to virtual meetings but silos still remain. Uptake of chat spaces like MS Teams is limited so that public conversations are relatively rare, although I see some progress on this. My organization has a largely command-and-control mindset, and the pandemic has not really impacted that. The promoted leaders don’t necessarily demonstrate a gig mindset either. Instead they tend to have traditional ways of working even the younger ones.”

“We saw the creation of new job functions to perform additional controls over expenses, people utilization, increased earning margins, and so on, instead of adapting to the new needs of markets and clients and looking for new ways to use our capabilities in more added-value services.”

What does being connected mean?

Take a look at the chart again. Note that the levels of feeling more connected are slightly lower than the levels of internal networking, for both the top and bottom groups. External networking did not seem to make a difference. The top 25% did this extensively, 4 or 5 times more than the bottom, yet the feeling of being connected did not increase proportionally.

Does this mean that connectedness is primarily interacting with others inside the organization? Or did the external networking have a different purpose? Perhaps exploring new opportunities?

What do you think? What did lockdown change in the workplace around you?

Share your thoughts in the comments on the original post on LinkedIn (from December 12, 2021) and see what others think.