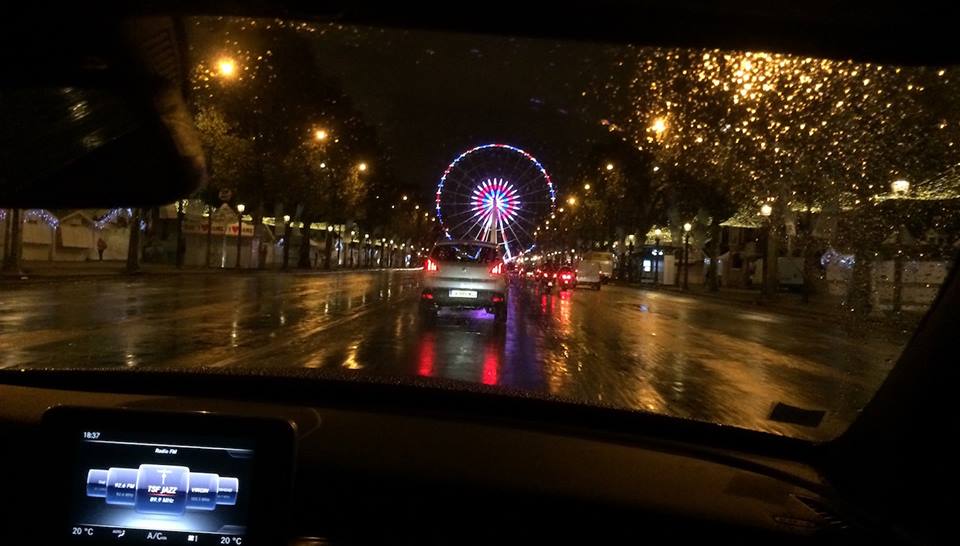 When I went up to Paris several days after the Paris attacks for a meeting, I took a taxi (or rather a private car) driven by a young man. I asked him if he had been working on Friday the 13th and he told me he was in the 3rd arrondissement when the news came out on the radio and he drove immediately to the area where the attacks were happening and started picking people up in the street and driving them home.

As a private driver there is no taxi symbol on his car, so he pulled over each time he saw people walking and looking panicked, rolled down his window, and offered to drive them home. He did this from 9pm until after 2 am. People wanted to pay him and he refused money, going to the extent of running after a family in the street and giving them back the bills they had left on the seat of the car.

He told me, a bit embarrassed, that he still lived with his mother, and that she kept calling him on his cellphone begging him to come home. He refused saying “I can’t Mama. People need me.” When he got home around 3 am, his mother was sitting up in the living room waiting for him. I said, “I bet your mother was proud of you. “ He looked at me in the rear view mirror — big smile on his face — and said, “Yes, she was. But I just did what anyone would have done.” I took the photo above from the back seat of his car. You can see the huge wheel at Place de la Concorde the evening of Nov 17th, 4 days after the terrorist attacks. It was a magnificent, defiant scene in the sky.

A week later, I was in Paris again, wondering how things were. In spite of serious disturbances in the Place de la République area, there were quite a few people in the streets. I had an appointment in the 11th arrondissement and drove by the Bataclan. There were scores of people in front of it, and my driver said it was the quietest he had seen it since the 13th. I asked him if he had been working the night of November 13th. He is part of the G7 taxi company group and their headquarters sent several messages immediately on the taxi radio asking drivers not to go home, to continue driving.

Then, a few minutes later, their union communicated with the drivers using text messages, Facebook and other non-official channels asking the drivers to turn off their meters and drive people home from the scene. He immediately turned his meter off. I asked him if all the drivers did the same. Peer pressure was high, he told me. In Paris, a taxi with a passenger has a red light on top. The light is green if the taxi is available. Those with meters still on (a minority) soon turned them off. He said there were around 1500 drivers that night, filling their taxis ­ — always taking as many people they could fit inside the taxi before leaving the area — then taking people home. Some people got in his taxi and tried to get him to drive them home immediately. He said no, he had to fill his taxi first.

He described to me what it was like hearing cell phone conversations in his taxi — some were very hard (emotionally) to listen to ­ — people trying to reach family and friends, and sometimes getting bad news. He added that he understood if some drivers had decided to go home that night. He said if you were a “fragile” or nervous person, you could not act in a safe way: you risked panicking or driving badly knowing that some of the terrorists were still running and not knowing what was out there in the dark. In that case, it was better for you to go home. He was very close to the scene when the anti terrorist brigade took over the Bataclan at the end, and was sure at first that it was the terrorists again. He became very emotional as we talked, and said he will never forget what he saw and heard that night.

These two men were among the many unsung heroes of the night of November 13th in Paris.