Some people are surprised; others have concluded it is because social collaboration (or “social business” as some may call it) is dying. I disagree with this analysis. Data from my recent report The Digital Workplace in the Connected Organization 2014 tell a different story:  Early Adopters have finished buying and are now focused on learning to work in new ways. The Majority are in “wait and see” mode.

“Customers aren’t as interested in social software for the enterprise as it seemed a few years ago.”

“The problem appears to be that customers aren’t as interested in social software for the enterprise as it seemed a few years ago. In 2012, Jive added 133 new customers. In 2013 it added only just a little more than half that many: 76. Since Jive is a subscription product, the pace of customer additions is a key indicator of the potential for future revenue and billings.” March 11, 2014. “Collaboration Software Maker Jive Explores Sale”

“Venture capitalists turn their back on enterprise social software.”

And let’s see what data from 314 companies around the world show….

Deployment of enterprise social software has increased yearly since 2009, but slowed down between 2012 and 2013.

(Note: Data are collected in the second part of the year preceding publication of the report. For example, the 2014 report is based on data from Q3 of 2013.) 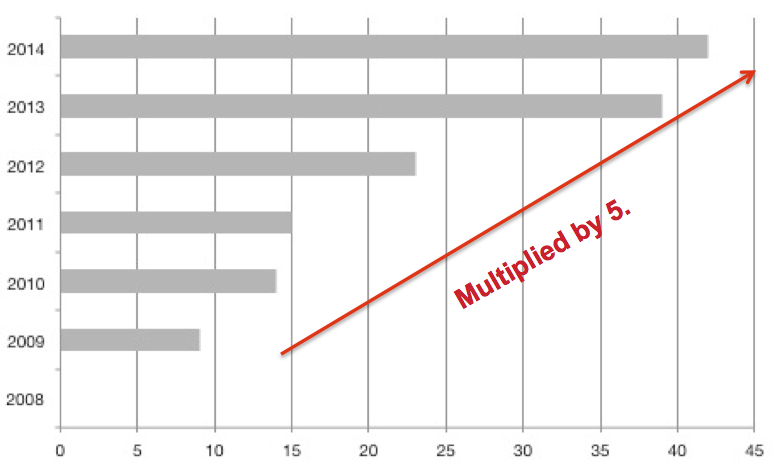 The chart above shows the deployment rate of internal enterprise social networks over the past 6 years. The top bar shows there’s plenty of room for more sales: today fewer than half of organizations have an internal social network deployed “enterprise-wide” or even just “in some parts”.

Vendors caught in the gap between Early Adopters and the Majority.

Venture capitalists of course want to invest where they will make money. You make money through sales. And sales are not  happening right now according to industry experts. Why not?

The explanation is simple. Early Adopter organizations have made their purchases. Nearly 60 percent have deployed a social network. The Majority of organizations are still testing the waters. 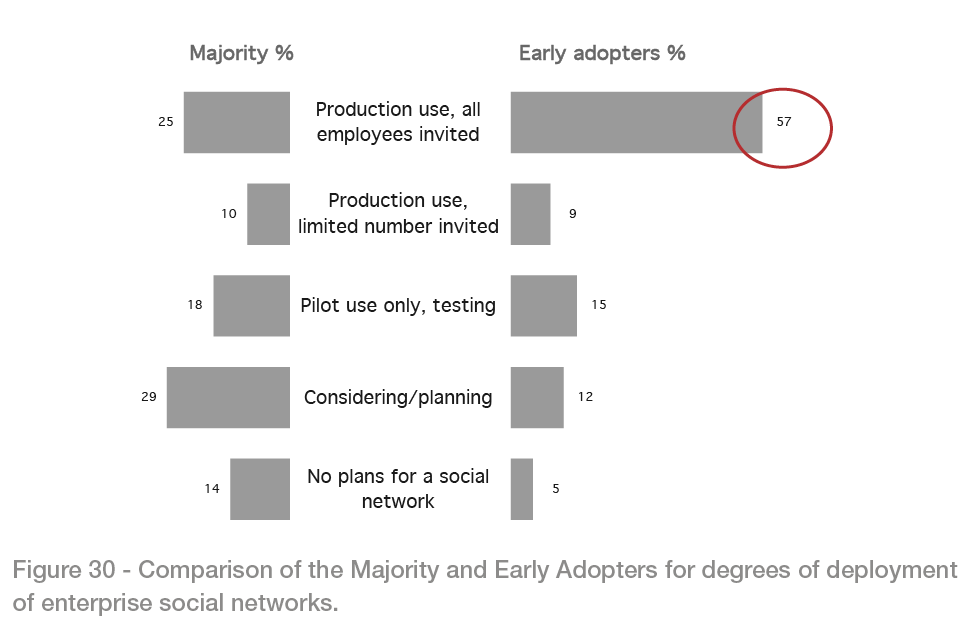 Deployment is just the beginning: changing how people work is the real challenge.

It’s one thing to deploy social software; it’s a whole different game for an organization and people to use it in meaningful ways. Although activity is not the best measure for effective use of social software, it is a starting point for perceiving whether or not people are using it. And the truth is that activity rates are low, even in Early Adopters. 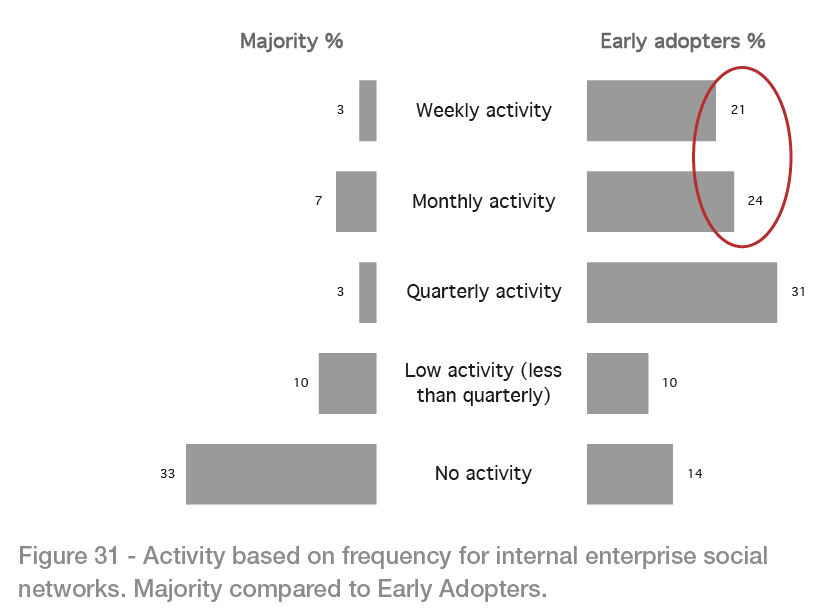 Social is still outside daily work.

Most organizations are at stage three in the process I described last year at the 2013 Enterprise 2.0 Summit in Paris: “Five Reasons Why Social Intranets Have Not Taken Off” (see slides 4 through 9). Stage three is where social is present in the organization but lives in a corner or in a layer of its own. 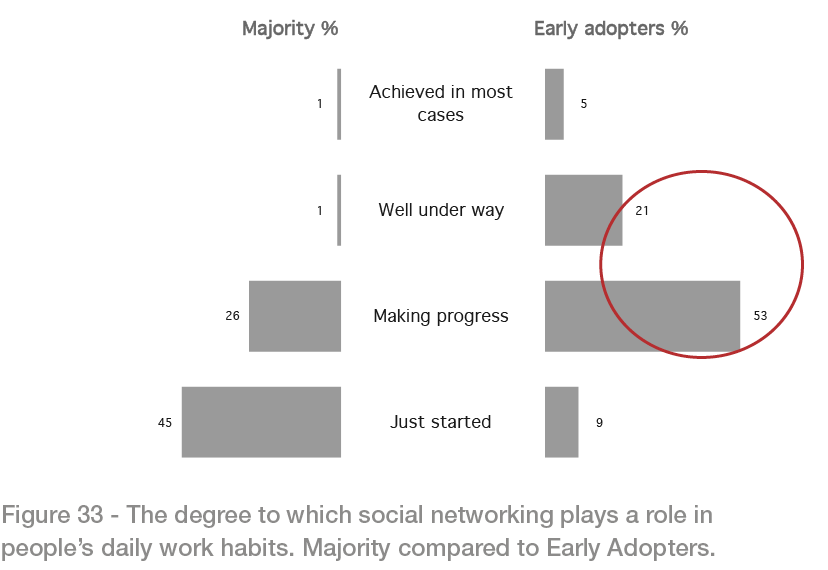 However, change is happening and real cases tell the story better than data.

Three examples from “In Practice” cases in “The Digital Workplace in the Connected Organization” show how some organizations are using their enterprise social platforms for business needs.

“Employees need to be able to give their voice and ideas on initiatives launched at different levels in the company, using simple channels like our internal social network. Recently people throughout the company participated in the final decision process of our CEO Excellence Award. Another example:  people were invited to send contributions to a company initiative launched just after the arrival of our new CEO.  Many of the ideas submitted were included in our transformation plan.”

Aegon is reinforcing their collective intelligence through enterprise Q&A.

“A common occurrence that triggers connection between employees relates to asking questions. So for instance, an employee who has an ‘ask me about’ field completed on their profile will get a notification whenever anyone in the organization asks a ‘question’ (a specific type of post) with a hashtag term that matches their ‘ask me about’ field in their profile – regardless of whether they are already connected. So we have seen employees asking for specific templates and questions and then having people from all over the organization respond with the answers. This means that the collective knowledge of the organization is, in a very practical way, much more accessible.”

“A business developer in India once had to answer to a very specific, technical question from his customer about a competitor’s solution. He started a discussion thread in the Competitive Intelligence community and quickly gathered key replies from experts around the globe. Not only was he able to satisfy his customer’s need, but this information now remains available to peers who have a similar question in the future.”

The tipping point happens when business functions start working in socially collaborative ways. Although it’s obviously important for general employee support functions such as Communication, HR, IT and Knowledge Management to be involved in social collaboration, the significant difference is when Business gets involved.

When Operations, R&D/Engineering and Sales/Marketing and Customer-facing people start leveraging  social software to do their jobs, it means social collaboration is being taken seriously. The chart below shows that Business functions in Early Adopters are more likely to be an “active and driving force” and/or “visibility active”. 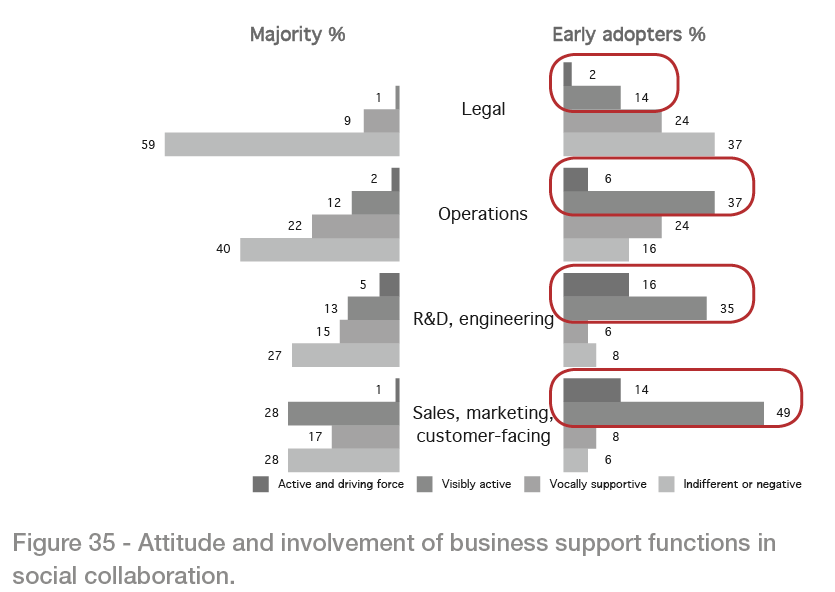 The beginning of change: social as a new way of working

So why are venture capitalists losing interest and why are fewer customers are buying social software today?  It’s because companies are not buying: they are doing. It is the beginning of a new era, an era of focusing not on the tool but on behavior and change in ways of working.

The Early Adopters are currently tackling the big issues of How, that’s to say: How do we go about bringing change? The What – the social platform itself – is already dealt with, at least for Early Adopters. As for the Majority, we may need to wait a little longer before they join the movement.

When there are more meaningful stories out there, coming not from vendors but from the organizations themselves, we might see deployment (and therefore sales) pick up again for enterprise social software. Whether or not it will be the current big ESN players that benefit or a new generation of social software solutions remains to be seen.

For the organizations in “wait and see” mode, it might be hard to catch up with the others later. Deployment of a tool is relatively fast compared to changing behaviors. The sooner you start, the sooner your organization will discover its own path. And although there are a few “good practices”, each organization will have to find its own way, step by step. This is not a big bang change we are talking about.
(Data from 2013 Q3 from 314 organizations worldwide: The Digital Workplace in the Connected Organization.)

Organizations in the Digital Age Customized Report BYOD and High-Performing Companies Change Agents—Nearly As Important As Senior Leaders Where did search go? High-Performing Customer-Facing Workforce and BYOD Working out loud not yet the norm Hacking Work – Bring Your Own… Going social? Don’t create needs. Respond to existing ones.
Articles about the Gig Mindset
Articles about the Organization in the Digital Age
Articles from my archives 2004 to 2015