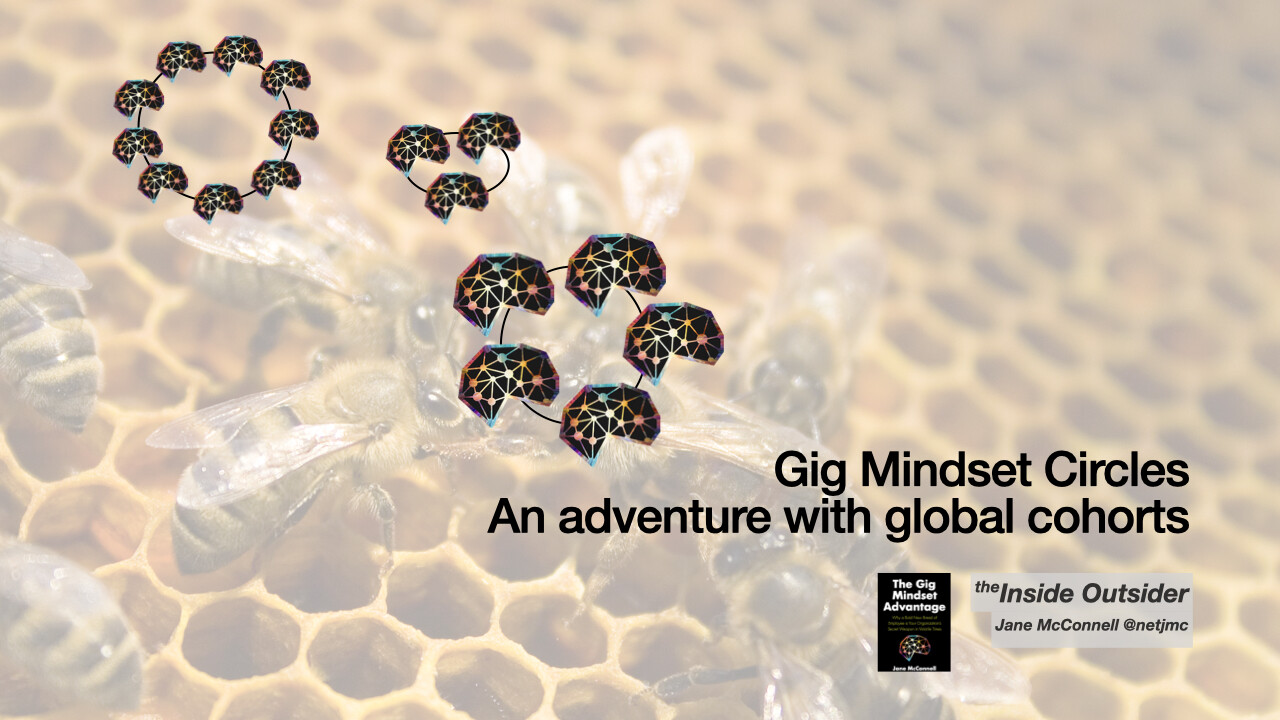 I have witnessed interest in the gig mindset in people around the world who are striving to trigger change and looking for action! This is part of what I call creative resignation. Leaving the old and building the new.

But it’s hard, actually risky in some cases.

When people work on change, it is an adventure that is best shared with others. This is both smarter and safer. This is raison d’être of the Gig Mindset Circles. Read on….

Creative resignation is asking the question: “How can I find a new role, transform my work so I can live a work life with purpose?” Creative transformation is finding an answer. And it’s a two-way venture.

Organizations need to be questioning themselves, and not focusing exclusively on “How can we keep people?” but more broadly and strategically on “How can we build a work culture where people want to stay?”  The reversed thinking is different.

Keeping people or creating a culture where people want to stay?

I wrote about this in a piece published by the Harvard Business review in January: How workers with a gig mindset can help your company thrive. In fact, I’d say “help your company survive”!

From an old to a new work life

I’ve been thinking a lot about this since I wrote The Gig Mindset Advantage which was published a year and a half ago. Based on the feedback I’ve had, I know that the book has inspired people to understand their own behaviors, change their work lives, adopt new behaviors in spite of potential obstacles. It has inspired a few organizations – though not as many as desirable! – to question their status quo, and to develop practices that are more interactive, satisfying and purposeful for employees and customers.

In spite of some opposition from management, more people now feel confident to take initiatives, experiment with new ideas and ways of working. They share their work openly, looking for feedback from other people. They keep their eyes on what’s happening in the external world. They often come up with new ways to deal with problems and challenges. Progress is slow, but from what I see it IS happening.

Above all, people are realizing they are not alone. There may not be many of them in their own organization, but there are lots of people scattered around the world who are struggling to make lasting changes.

I’ve seen this personally, firsthand, for the last year and a half, from initiatives I have been involved in. In each case, after the event, I got emails and notes from people who said my message rang a bell.

Now is the time to build on this worldwide interest in the gig mindset.

Thus I have created the Gig Mindset Circles. A gig mindset circle is a group of people who want to build a gig mindset work culture in their own organization.

The facilitators for these circles can be internal people from inside the organization. Or they can be external people, who make this work part of their service offering.

All the facilitators are part of the Facilitator Gig Mindset Circle composed of other facilitators around the world. They meet online regularly to share experiences and questions. Influencing a work culture is not always easy. Interactions with others on the same journey can make the critical difference. Sharing disappointments, successes and future obstacles to overcome.

Are you potentially interested in embarking on this adventure, with peers around the world?

I believe this initiative will make a big difference for many people and organizations. On one hand, organizations are having trouble finding employees. On the other hand, people struggle to find jobs with purpose in organizations with sustainable missions.

Two (rare) management-level people shared with me their views of the gig mindset. A manager in a global transportation company in Scandinavia believes it is a priority to retain people with a gig mindset:

A CEO in a mid-size US-based company considers it a strategic advantage:

Comments like these, and others, convince me that Gig Mindset Circles have an important role to play.

Would you like to learn more about the Gig Mindset Circles? Are you potentially interested in being a facilitator or joining a group?

How much do the Handbooks cost?

Nothing. They are free, published under a Creative Commons Attribution-ShareAlike 4.0 International License.

Why did I decide to make the handbooks free?

My goal is to find people around the world who are interested in creating and joining the circles because they, like myself, want to bring change within organizational life and more meaning to the workplace. The more of us the better!

Would you like to give feedback to my Version 1 of the Gig Mindset Circles? I’m looking for early readers’ comments and feedback for both the Facilitator Handbook and the Member Handbook.

If you’re interested in giving feedback, in being a facilitator, or in joining a circle, get in touch for an exploratory conversation.

About the book The Gig Mindset Advantage

Have you worked on establishing a gig mindset work culture in your organization? How is it going? Can you share a little with us?

If you found this post and my report useful for you, you might consider subscribing to my new newsletter The Inside Outsider.