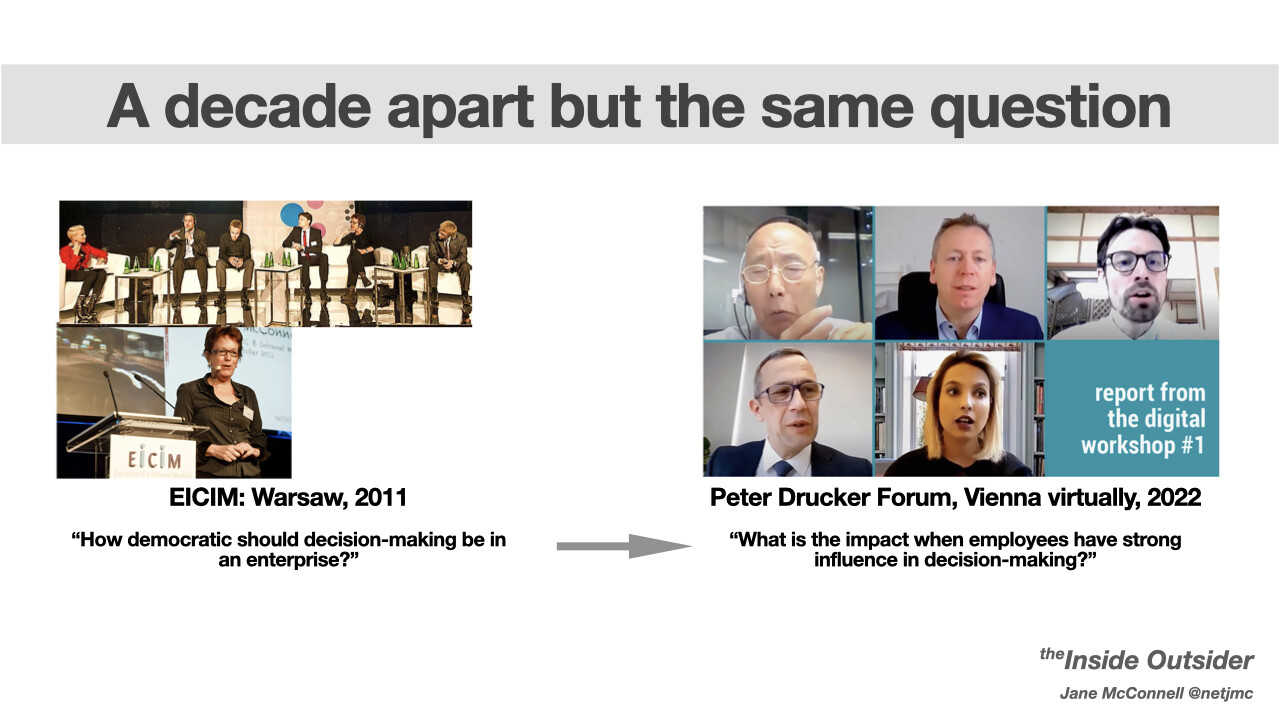 2011: Looking back to concerns a decade ago in a previously communist country

In 2011, I keynoted the first internal communication / intranet conference in Poland. It took place in Warsaw with a large group of attendees of all ages. The event was the European IC & Intranet Meeting.

The purpose was to address three questions:

1 – What will your workplace look like in 10 years time?

Note that we are now 11 years beyond the time-frame of this question, and we are still asking it, fortunately!

2 – How will you communicate with your boss and colleagues?

Again, still valid, even more so as employees are beginning to have the courage to challenge the status quo, and to search out peer-to-peer discussion rather than top-down Q&A.

3 – Will your boss cut you off from Facebook or will he create one of his own?

And yes, alas, Facebook is still around, weakened to some extent, because of lack of data privacy no longer easily accepted by people. It will be fun to see how the new branding and positioning work out. My opinion is that it will not succeed as Zuckerberg would like. The metaverse is “universal”, and belongs to no one, but that’s for a different article. As for enterprises creating their own “facebooks” they are definitely doing this in the form of intranets and digital workplaces. Some are even talking about their own walled metaverses, as did Mark Gröb from UPS whom I interviewed on my podcast Bold New Breed.

2011 question: How democratic should decision-making be in an enterprise?

At the end of the conference, I was part of a round table discussion led by a Polish TV journalist who took us into the “human territory of enterprise 2.0 ” and triggered some thought-provoking discussions from the audience and the round table speakers.

A question from the audience directed at me was: “How democratic should decision-making be in an enterprise?”. (I wrote about the response here.)

When you are with people for whom the “open market economy” is only 20 years old, your perspective changes. At least a third of the audience had grown up and worked a good part of their lives under a communist government. Enterprise 2.0 raises fundamental questions.

My answer to the question was that people in an organization are accountable for specific things. It’s not democratic in that people do not vote on decisions to make. However, decision-makers need to listen, consult those who will be impacted by the decision, then make make the decision.

2022: Employee ownership perspectives getting better but far from optimal

I was asked to be the reporter for a Peter Drucker Forum Blog workshop entitled “Employee Ownership and Governance: How Putting More Power in Employee Hands Affects Performance in Turbulent Times”. (My writeup)

The existential question of the workshop session was “What is the impact when employees have strong influence in decision-making?”

The answer from the workshop was resoundingly positive: It helps organizations thrive, from both financial and human dimensions. Yet we still have too few organizations who give employees sufficient decision-making power.

There are deep changes needed in order to benefit from employee power. I have listed below three points that were strongly felt in the workshop and have taken the liberty of inserting short comments after each one. These comments are my own, and did not come directly from the workshop.

1 – Redefine the role of business in society to achieve sustainable, long-term, people-oriented values.

Comment: Today, in most cases, shareholder demands to make profits outflank stakeholder demands around employee well-being, environmental protection, and so on. The outing of the CEO of Danone illustrates this conflict where in 2021, the CEO was asked by activist shareholders to stand down because of “a combination of poor operational record and questionable capital allocation choices”.

2 – Rethink corporate structure and governance to make the new values real and actionable.

Comment: Although still a tiny minority, companies are leaving the hierarchical matrix traditional structure for shapes based on flexible teams, communities and even micro enterprises with competition. Haier is a famous example of an eco-system of micro-enterprises.

Two other systems based on rethinking organizational structure and governance are holacracy and adhocracy. Each has strong proponents and strong critics and you will find a lot about them in many sources on the internet. I’m not an expert on either, have heard pros and cons from practitioners about both and do not at this point have an opinion on either. (If you do, please share in the comments at the end.)

3 – Recognize and enable the new mindset of seeking purpose, to ensure that top talent is energized and engaged.

Comment: The B Lab, the non-profit organization behind B Corporations, has the goal to “balance purpose with profit.” for a decade. It has developed a rigorous certification process for companies to become “B Corporations.” To date, mostly smaller companies have been certified—Patagonia, Ben & Jerry’s, Eileen Fisher. It’s not surprising to find Patagonia on the list following recent announcements about their foundation and statement “the earth is now our only shareholder”. There are pathways for multinationals to be part of the B Corp movement. They involve reporting, materiality assessments, tax and government affairs disclosures and a human rights policy. From what I’ve read, Danone was on that path until the shareholders got nervous.

Each of these three points deserve a full article but that’s not for today! In general, we have a lot of progress to make in enabling employees to take greater control of their work lives and to benefit personally and for the the organization. Then there’s the next step to the new whole earth perspective I wrote about in the last issue.

Life is definitely not boring!

If you found this article, you might consider subscribing to my new newsletter The Inside Outsider.