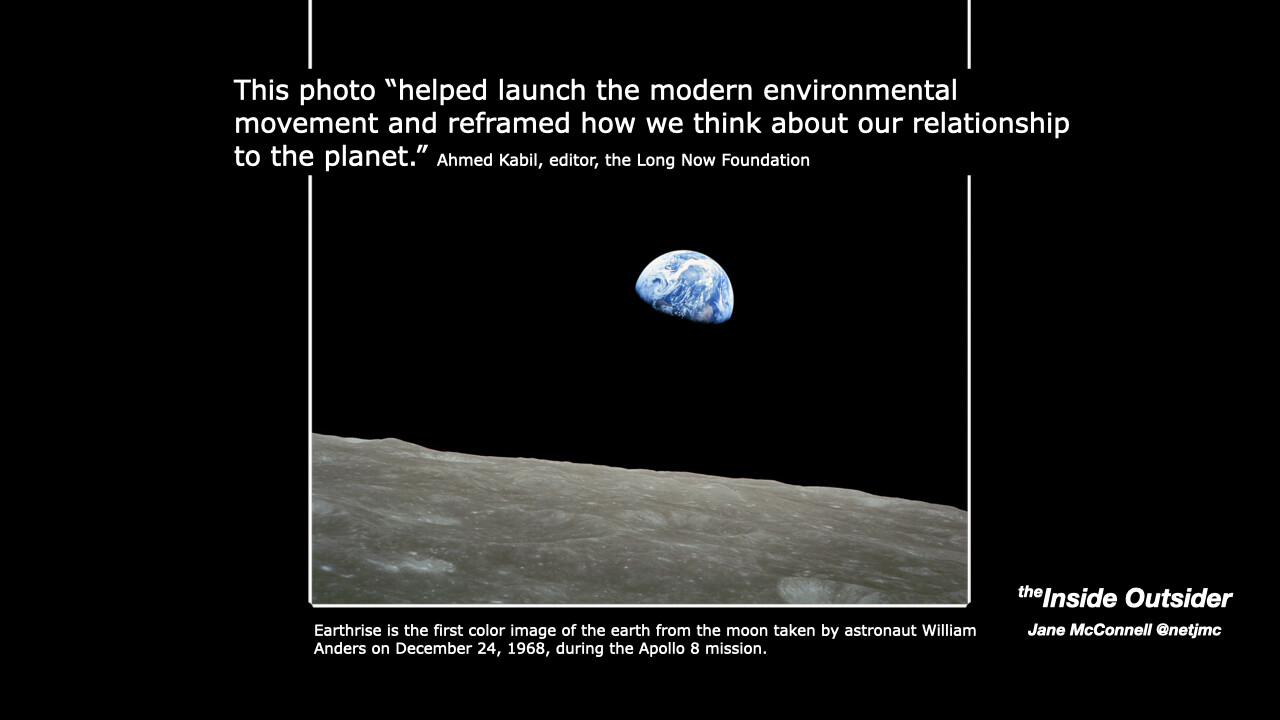 Over 50 years ago, Stewart Brand launched the Whole Earth Catalog. The first edition of the catalog had one of the first color photos of earth from space. Appropriate! The photo above is not the cover photo but is from the same 1968 Apollo 8 mission.

“You develop an instant global consciousness, a people orientation, an intense dissatisfaction with the state of the world, and a compulsion to do something about it. From out there on the moon, international politics look so petty. You want to grab a politician by the scruff of the neck and drag him a quarter of a million miles out and say, ‘Look at that, you son of a bitch.’” —

We need a renewed whole earth dimension for our organizations today.

The whole earth vision, unfortunately, has been lost. We need a new whole earth vision on planet Earth, one where people have access to what they need to live healthy, safe and purposeful lives. One where humans live in harmony with other species in the biosphere.

Am I dreaming? Many will say yes. Our planet is managed by national governments and large corporations who do not seem to be interested in these goals.

Baby steps in the right direction

My interest in the whole earth dimension started with the emergence I observed several years ago of the “gig mindset”. (The long story) In my book – The Gig Mindset Advantage – I talk about how gig mindsetters, bold employees who question the status quo, propose radically new ways of working and are evolving while mobilizing others to join them in a new way of working, the whole earth perspective where the internal organization and the external environment are no longer two separate worlds. In “Whole Earth Discipline” published in 2009, Stewart Brand says “the Whole Earth Catalog encouraged individual power; Whole Earth Discipline is more about aggregate power.” Gig mindsetters working together are a starting point to build towards this.

The whole earth needs people standing up for it

Corporations are not reliable whole earth leaders because they are trapped between conflicting shareholder and stakeholder goals.

To be clear, shareholders invest financially in the company and are usually focused on short term goals. Stakeholders are not necessarily invested financially but are impacted by the actions of the company and tend to have a longer-term perspective. Examples include employees, customers, partners, communities and the environment, the latter being the focus of this article.

CEOs and Boards are trapped in the shareholder vs stakeholder balancing act. Most companies act in favor of the shareholders. The Danone story illustrates this conflict.

National governments cannot be counted on because of conflicting history, geographies and priorities.

Rich developed countries and poor less-developed countries have conflicting perspectives. The former acquired wealth in part through actions over years that, inadvertently or blindlessly, harmed the environment. The latter now say: “You had your chance, now let us have ours”.

Many companies operate in multiple countries and are thus subject to varying environmental laws defined by a given country’s priorities, geography and needs. Based on organizational power structures such as location of headquarters, country divisions, sales, manufacturing and so on, decisions are made that are not based on the well-being of everyone.

So, we are left with the need for a transnational governance system.

Today we have some groups attempting to act as a global guide for the whole earth, but the ones I know do not work for two reasons:

(1) Consensus. They operate on the need for consensus, which usually results in agreeing on the lowest common denominator rather than the original stated goal.

Initiatives such as the United Nations Climate Change Conference (COP) have been a disappointment. Kim Stanley Robinson, author of science fiction work “The Ministry for the Future” attended COP 26. On a virtual talk he gave for the Long Now Foundation, he reported that in the negotiating rooms he saw that COP is consensus-driven, meaning there are no final decisions unless they are unanimous. He gave the example of how eliminating fossil fuels became diminishing fossil fuels.

(2) Show. The lack of concrete results has been a major criticism of the Business Roundtable. 180 major companies had agreed that part of the corporate mission is to “deliver value to all stakeholders”. But this did not happen in many cases. In addition, it appeared that many of the members, all CEOs, did not raise the issue of joining the BRT to their Boards. Was it because their board members would have disapproved?

Looking to The Ministry for the Future for inspiration

As I said in my previous issue science fiction helps us make decisions.

The Ministry for the Future, a science fiction novel by Kim Stanley Robinson, proposes a global governance system. The story takes place in the relatively near future. The Ministry is created as a transnational organization whose goal is to support citizens of the world today and in the future.

The leader of the Ministry, Mary, and her team and advisors realize that their goal extends far beyond the roles of organizations. They ask who enacts the world’s economy and decide that the central bankers are key. They are non-democratic and answerable to no-one. Mary convinces them, by appealing to their ingrained financial mindsets, to implement a system where decarbonization initiatives are valued through distribution of carbon coins.

The book includes other initiatives such as preventing melting icebergs from flowing into the sea, releasing chemicals into the atmosphere to prevent another heatwave, massive re-wilding and even civil disobedience. Progress is made and the whole earth becomes more equal and the environment more sustainable. However, our capitalistic systems is still in place, weakened but still there. This book is worth your time to read!

Some organizations are on the journey

Here are three examples described briefly below. There are more of course. Please help me build a list by adding the ones you know in the comments below.

Talk to the people who criticize you to envisage changes

Do not fall into the weak excuse: “It’s not our problem because it is outside the boundaries of our company.”

We need to build the understanding of a whole earth perspective in our corporations, companies and institutions. One way to start is to break down internal silos as well as the wall between the corporate world and the outside world.

Here are some suggestions for first steps:

What ideas do you have? What have you experienced that you can share with us?

If you found this post and my report useful for you, you might consider subscribing to my this newsletter The Inside Outsider.