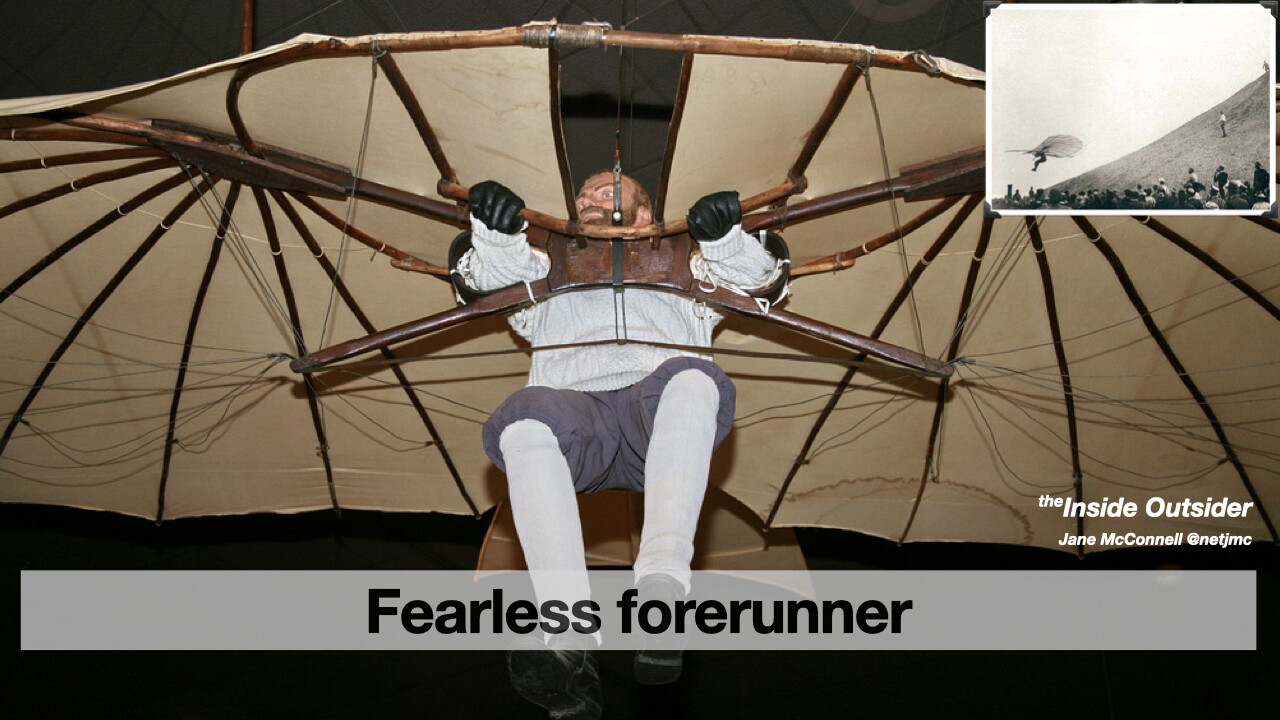 Gig mindset work cultures are forerunners of work organizations where fear does not dominate.

Our fearless flyer in the photo, Karl Wilhelm Otto Lilienthal (1848 – 1896) was a German pioneer of aviation who became known as the “flying man”. He was the first person to show that flying a craft “heavier than air” was possible. His work was described along with photos in newspapers and magazines around the world. He inspired other pioneers, the Wright brothers among others, to go beyond “heavier than air” and advance aviation to real flying machines.

Gig mindsetters are much like Lilienthal – they experiment, take risks, and encourage others to do the same. They challenge the status quo, step beyond what is considered possible, and overcome their own hesitations and inner fears.

Art Kleiner, organizational pioneer, and author of The Age of Heretics: A History of the Radical Thinkers Who Reinvented Corporate Management put his finger on a key trait of gig mindsetters:

“As I read The Gig Mindset Advantage, it dawned on me that the basic problem is …the way people internalize fear of others – to the extent that it becomes habitual. (The book) addresses these fears in new ways, each page different from the one before….”

My annually collected research data from 2013 to 2016 show that only 20 to 25% of respondents say people in their organization feel “free to experiment and take initiatives”. Nearly twice as many—45%—characterize their organization culture as one where “absolute compliance to rules, processes and instructions” is the norm. Over the same period, willingness to take risk has decreased. In 2013, 43% said their organization is risk averse; in 2016 that figure rose to 53%.

Did lock-down and working from home give people more freedom, decrease fear?

Interestingly, the period during the pandemic made little difference in people’s feelings of overcoming fear and feeling greater freedom at work. My research from 2021 showed the following:

Is the great resignation a sign that we are overcoming fear?

This lack of significant change inside organizations is one of the factors behind what we are calling the “great resignation”. People discovered how constraining their work life had been pre-pandemic. Now they want more. Purpose, time, and greater freedom to organize their work and lives.

Yet, many of us still have fundamental fears to overcome. When researching the book I interviewed a senior director in a technology company who said something about fear I have never forgotten:

“That inner fear, that inner monologue, can sometimes be very loud. That is a personal challenge.”

We’ve seen that many organizations are now facing a new reality, new fears for which the solutions are neither obvious nor easy:

They have lost employees be they gig mindsetters who have moved to new challenges or employees in general who are unwilling to return to their old work for various reasons.

We need new eyes and new thinking. I will be writing about this more, but in the meantime, my article from January 2022 in the Harvard Business Review about the importance of learning cultures is a starting point: “How Workers with a “Gig Mindset” Can Help Your Company Thrive”.

Quote from the article: “Fostering a gig mindset learning culture is a retention issue — if gig mindsetters encounter repeated obstacles, they may decide to look for more fulfilling places to work. This is easier to do now that established organizations are actively seeking new talent and small businesses and startups abound.”

Seven years earlier I wrote “The Company Cultures That Help (or Hinder) Digital Transformation”, again in the HBR. Today, I extend the thinking of this article to going beyond digital transformation to transformation period! Two points in the 2015 article relate directly to fears felt by many managers: that of losing control of what people do and how decisions are made.

Quotes from the article:

Managers need to let go. Trust people. Listen to the edges.  This has been said multiple times,  but as André Gide reminded us: “Everything that needs to be said has already been said. But since no one was listening, everything must be said again.”

Check out my book, The Gig Mindset Advantage, available in hardback or digital format from major booksellers worldwide.

You can also request an invitation to join a community of gig mindsetters who share stories, frustrations, accomplishments and new project ideas in a private space.

The Age of Heretics: A History of the Radical Thinkers Who Reinvented Corporate Management, Art Kleiner, 2008