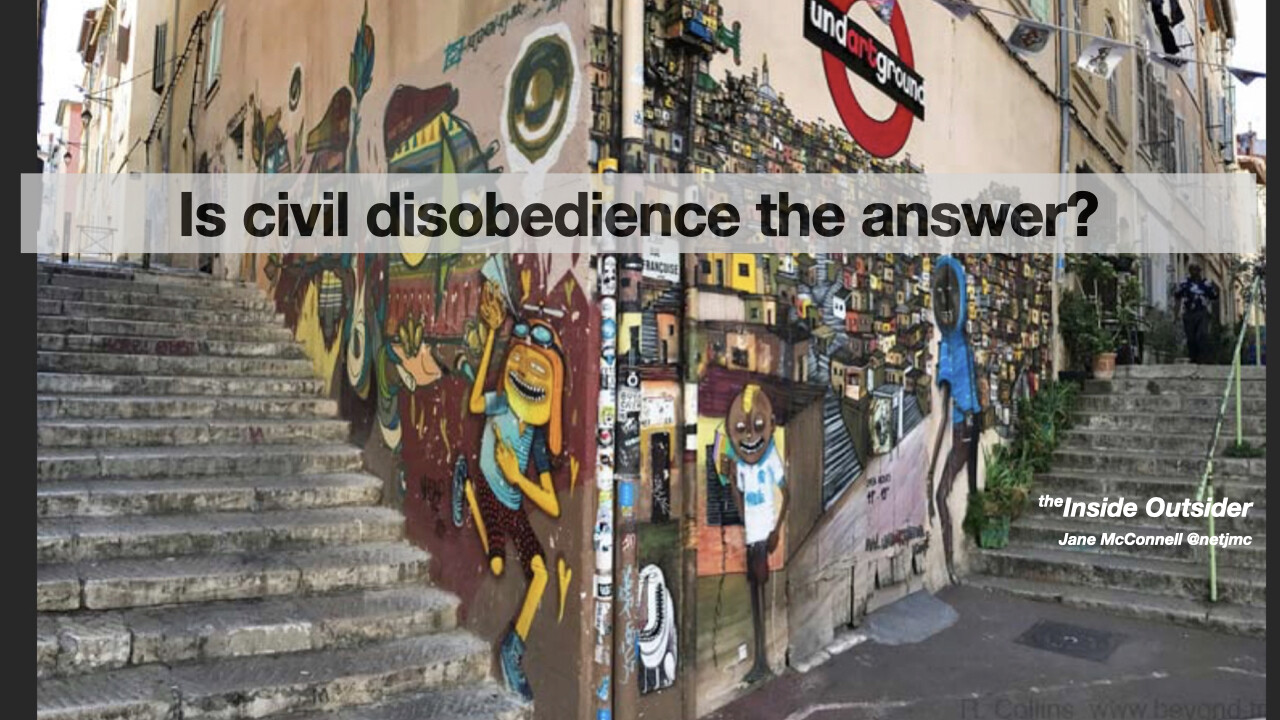 This article was inspired by my preparation for a discussion around Civil Disobedience with my Bold New Breed community. It is based on content from The Gig Mindset Advantage, and I’ve included page references if you have a copy and want to read more. If you don’t already have one, it’s not too late to buy it!

Civil disobedience for the good of the organization

Gig mindsetters are doing what they believe is in the best interest of their organization. Just like people carrying out civil disobedience in society. In political and sociological terms this is the nonviolent refusal to comply with regulations of established authorities because they are considered to be wrong or detrimental. In this spirit, gig mindsetters act in what they perceive to be the best interest of their organization—even when this means they will be perceived as troublemakers.

I interviewed an engineer at a global industrial company headquartered in Europe  when writing The Gig Mindset Advantage. What follows are some extracts from our conversation.

There’s no one way to bring about change

He emphasized what he and colleagues had come to realize about the importance of flexibility and not getting fixed on one method or another: (page 9)

“It just seemed to me that there was no right answer. It was whatever people chose and made sense for them.”

It’s like bringing change in society. We need civil disobedience.

He and his colleagues strived to bring visibility to how ways of working are changing, through actions he referred to as civil disobedience:

“Some more radical things were coming from the idea that, if we are going to change a company as large as ours, it’s not any different to change in society, so why don’t we do things like civil disobedience?”

“The idea was actually protesting peacefully in a place on our campus in full visibility of senior management offices. We wanted to call attention to what we are already doing so others can see and join us.” (page 20)

We no longer need traditional management.

People fear losing what they have. For senior leaders, the premise of the gig mindset disrupts long-held views about themselves, how they work, and how they are being challenged, indirectly, by people throughout their organization who are beginning to act independently of hierarchies and taking initiatives that are not pre-approved.

The engineer pinpointed the challenge: “The gig mindset and flexible ways of working vastly undermine the existential purpose of traditional management, managerial control, or positions for individuals who may have been working for 20 or more years.” (page 31)

“Because they’ve become so attached to the idea of being a manager and what that means, it’s incredibly destabilizing to imagine that suddenly their role as they lived it for so long is no longer needed.”

Two key behaviors of people who bring change to organizations are their willingness to challenge the status quo, and their ability to detect issues others have not seen and mobilize cross-organizational teams to find workable approaches.

These beliefs and courage to act are essential for facing the future, or even more simply, dealing with the present we have today.

How does this fit with your experience? Within yourself or from inside your organization?

See what people are saying about my book.

If you find my work useful for you, you might consider buying it: The Gig Mindset Advantage – A Bold New Breed of Employee.